Big art news this morning, and a massive post to match! To start, the Spacefriends sticker set I promised on my Facebook page a few weeks ago is finally up in the shop, along with a ton of original art, rare prints and drawings. 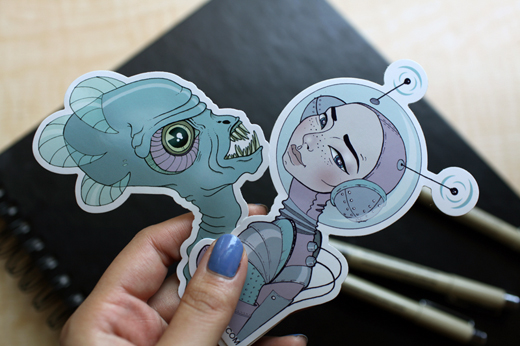 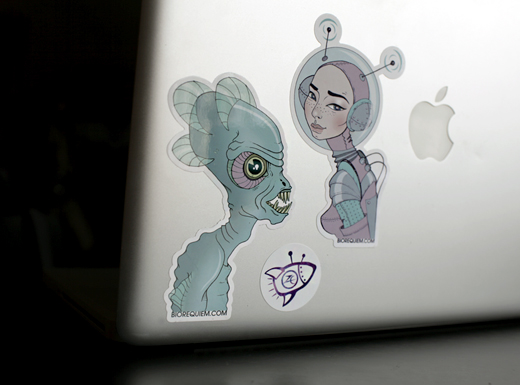 I recently decided it was time to make room. Specifically, to let go of the art I’ve grown too attached to and to make room for air, light, cash money and new work. As such, I’ve been adding stock to the Biorequiem shop, pricing to sell, and rolling out glimpses of the additions on Tumblr and Facebook, as well as in yesterday’s Biorequiem newsletter. 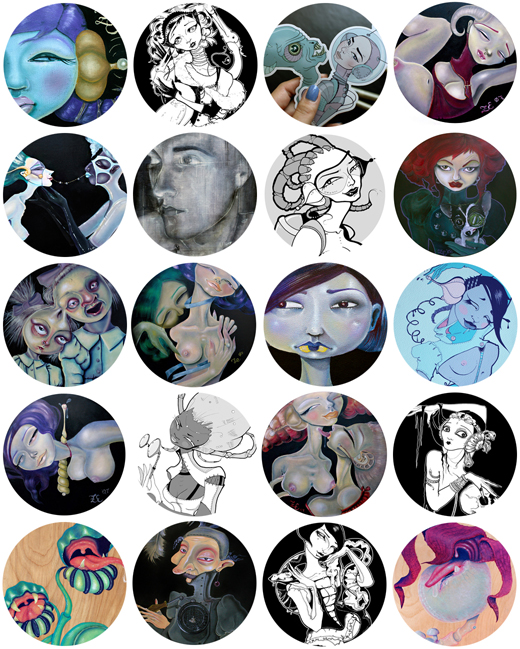 Subscribers got first peek at some of the recently added goods, and now it’s time for a complete breakdown, right here, right now. Each circle is clickable and will take you to the item’s shop page. 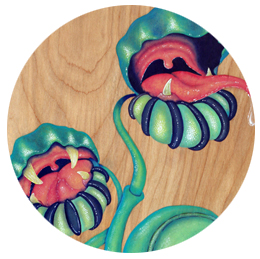 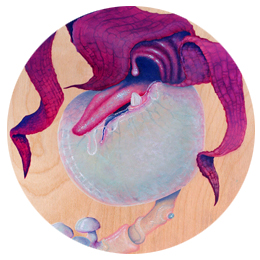 The parents of my latest prints and my first forays into documenting alien botany, painted earlier this year. These hybrid plant-creatures inspired me to begin exploring the subject in depth. I’m currently working on a new series dedicated to this topic. 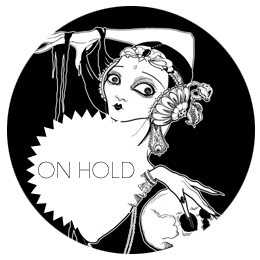 This original drawing of a witchy German Expressionist starlet of the silver screen was featured in Coilhouse 06. It’s mounted on a black background and beautifully framed in matte black. 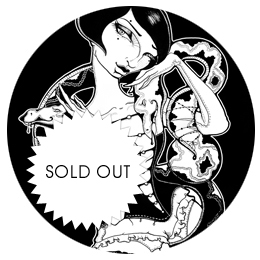 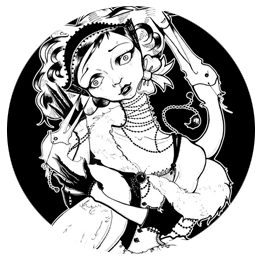 Two original drawings dedicated to communing with animal spirits and featured in Coilhouse 04, mounted on black and identically framed. I credit Snake Charmer as the piece that planted the very first seed of my interest in alien botany – it was while drawing these snakes that I first felt a pull toward illustrating non-human subjects. 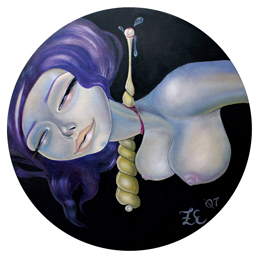 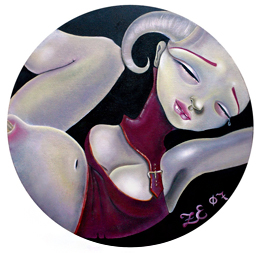 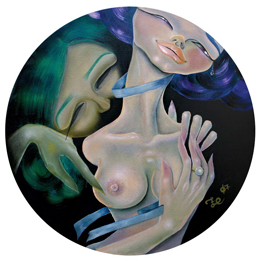 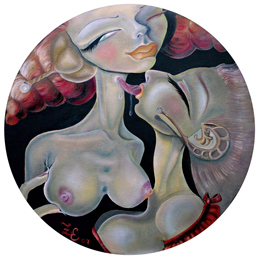 The Pleiades is an open star cluster containing in the constellation of Taurus. In Greek mythology, the Pleiades were the seven tragic daughters of Titan, turned into stars by Zeus to escape Orion’s unwelcome advances, at least according to some versions of the legend. I’ve always been in love with space and grew up scarfing down Greco-Roman myths for breakfast, so this theme is especially close to my heart-nubs.

The paintings were created over the course of 2007, each taking one to two months to complete and shown in several US states and Canada. Limited edition prints were made and sold out during my solo show in Toronto, with the exception of a few listed here alongside the originals.

Start Transmission and Don’t Breathe on Me 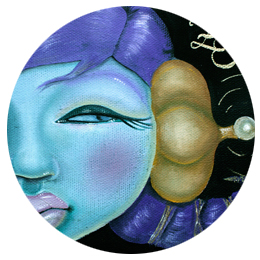 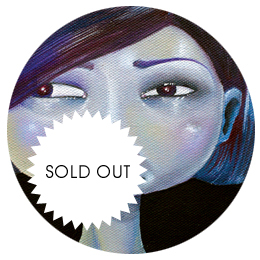 Sold separately but eerily complementary, these little ladies were not intended to be a pair when I originally painted them. On the left, a keen 5×5″ interstellar vagabond is catching a signal. On the right, a self-aware 6×5″ cynic asks you not breathe on her as you lean in for a closer look. 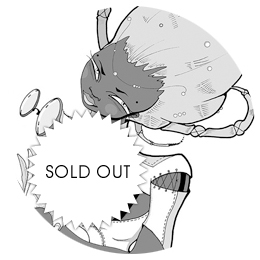 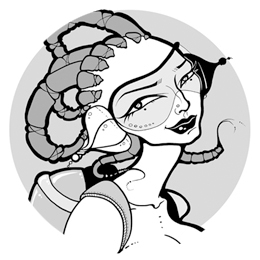 Part of my Off-world Cloud Hunters series, the Inspector and Messenger were released in limited editions for an exhibit. Only one vigilant Inspector and three gallant Messengers remain! They are printed in velvety black and gray on 11×17″ smooth white archival paper. 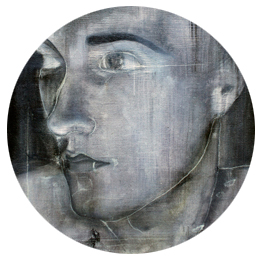 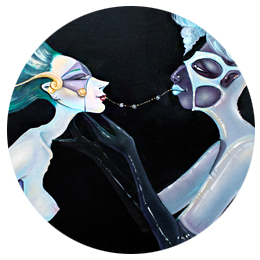 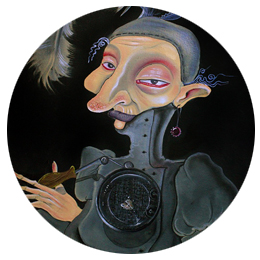 Nothing escapes a woman’s eye, the lady of the house liked to say. If you look closely, you’ll find two critters engaged in a tender embrace, right on the dame’s frock. 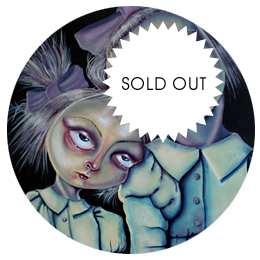 She was witty and pretty, most of the time. 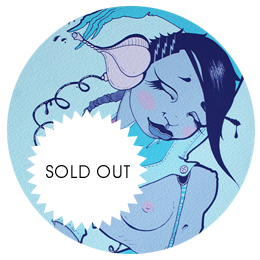 A Biorequiem classic. Poke prints were available for several years, and were finally discontinued last December. I discovered this unusual version while moving my studio – as far as I can tell, this color combination never made it to the shop. It’s the only one in existence, so if you dig it, snatch it up!

The Baroness of Impending Victory, with Protege 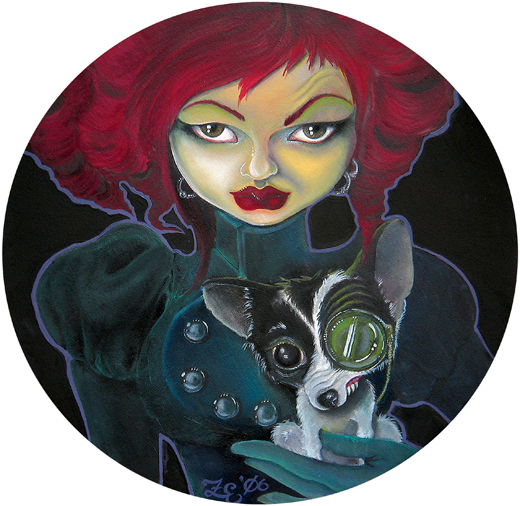 A tongue-in-cheek self-portrait with my long-lost comrade, Moo and a proto-GHST RDR jacket. She does a monocle justice, don’t you think?