One of the strangest years of my life is drawing to a close as I’m moving into the first home I’ve ever owned. An ordinary enough event, but when “home” is a concept shaped by a fractured family, by a storied pattern of running away, and by multiple immigration, a moment like this calls for reflection. I take this leap as a self bolstered and refined by a kaleidoscopic array of experience, and by eight years of an electric alliance with the partner who has been instrumental to every key facet of this evolution. Today I think about all that’s been endured, and all that’s been discarded in order to become the self who’s found a city to call home, and about how it took this aberrant year to step into my totality.

A lot happened in 2020AD. There is the still-raging global pandemic, which, in addition to immense tragedy, has brought much of the world to a grinding halt. The Black Lives Matter movement has been shaking down broken systems worldwide. There’s been the chaos, bitterness, and fury of the US presidential election. There were three deaths in my 2020, all devastating in their own way, beginning with the murder of an old friend by an obsessed ex, the cruelly belated passing of my Alzheimer’s-ravaged grandmother, the sudden death of a 38-year-old someone who saved my life a long time ago. And the wave of #MeToo has been thrashing cataclysmic, sweeping me up in its torrent.

I hadn’t aligned with #MeToo because of a potent aversion to a certain type of victim mentality; too many brats and bullies hide behind this label to absolve themselves of transgressions, to blame-shift, and to assign themselves some kind of corrupt gravitas. Victim-as-identity-and-platform. Fuck that. Still, the fact remains: one secret I kept from myself is that for most of my life I’d existed in survival mode without knowing it, my subconscious splintering my experience into compartments which permitted me to move forward. I was convinced that I’d resolved the traumas of my youth by separating myself from those experiences and wrapping them up into a neat “I’ve dealt with this” package, setting it aside, and presuming that being able to talk, or even laugh about it all meant I’d gotten over it. In reality, those traumas and the aggressive survival mechanism they necessitated affected every bit of my reality interface until I began dismantling it about ten years ago, the final bits shaking loose with Amie’s murder this February.

So, when the Warren Ellis reckoning came in June, I’d already been doing a lot of psychological heavy lifting, and was ready to do some more. My experience with him was minor compared to what the others (more than sixty, to date) went through; I often benefited from his performance as Grand Supporter of Women, which helped him gain more access to vulnerable people behind the scenes. I felt a great deal of responsibility. Working with the others affected by WE on the website aimed at shedding light on his abuse pattern and the systems which supported it included compiling a Resources page (books, academic papers, articles, a glossary), intended to help victims of abuse recover. I took great care with this research, and I took my time. In retrospect, it’s a little funny to know how many hours of research it took for me to grasp that these resources are also for me.

I decided to take advantage of the life-pause inevitably brought on by relocation, and of my now-empty flat to spend some weeks in a pile of academic psychology tomes, doing what witches might call “shadow work”, and what shrinks might call “integration”. There’s no chance of me divulging any sordid details*, demanding pity and exculpation, or declaring some paranormal rebirth, though – all our actions and experiences are part of us, no matter how much we might wish to reject them. Suffice to say that though there is more work ahead, I find myself waltzing from the gauntlet much-improved. I’m growing, and no past experience is hidden from me anymore.

A very strong friend of mine, who’d been through far worse than me, recently suggested that the reason I’m suddenly able to process my past is that I’m finally “home”; he’s not wrong. Breaking down parts of oneself is difficult and all-consuming; it requires a safety net, which I’d never had until now. Strangely, buying a house flipped some internal master switch in me to “SAFE” mode. The luxury of claiming the time necessary to regenerate is not lost on me – I have been exceptionally lucky, but that’s not all. There’s been a great deal of work and a great deal of risk; every great risk followed by great transformation, every blood-curdling leap rewarded tenfold, even if it wasn’t always immediately apparent.

A new door opens, and I find myself in a life I’ve been working towards. In this moment, I want to acknowledge and reinforce the commitments I’ve been making: to continue growing through dedication and inspiration, to remain vigilant in the quest for a principled, jubilant existence and personal authenticity, to remain beholden to no one, to be a force for good, to nourish genuine, fulfilling connections, to always endeavour to make better art, and to never forget that there is ever less time to squander; it’s right there, in the name. 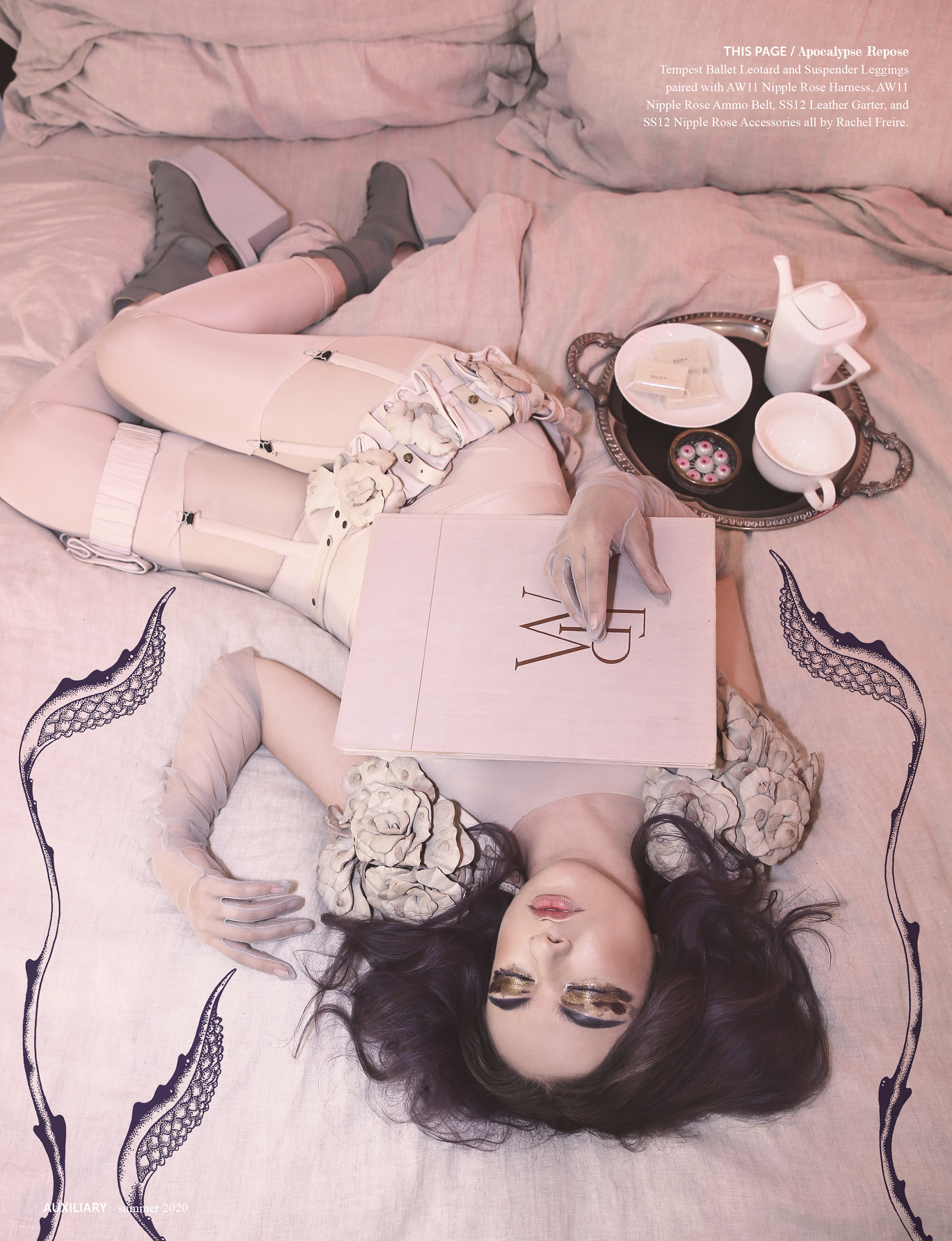 Some splendid things managed to happen this year, among them, a lockdown-themed editorial (which will eventually get its own post) for the summer issue of Auxiliary Magazine, which I art-directed, photographed, illustrated, and modelled in. This image, self-shot in my East London flat, encapsulates what much of 2020 has been like for me.

*The traumas referenced here are not connected with W. Ellis.